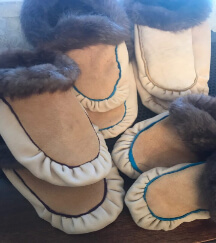 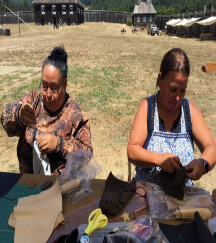 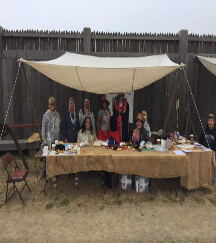 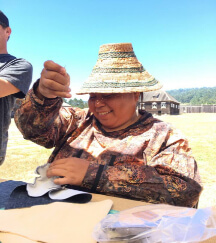 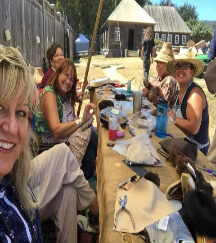 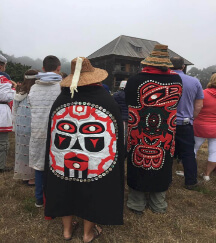 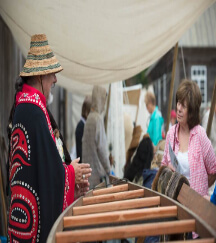 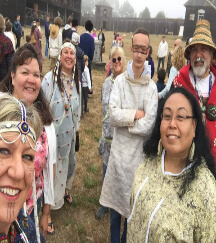 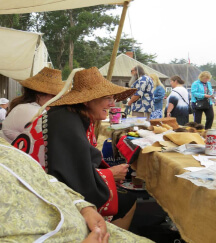 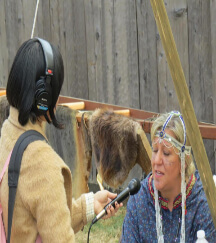 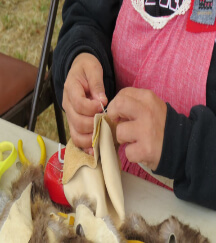 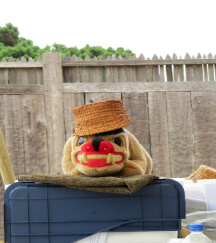 CAlaska Culture held its first traditional Alaskan Native Moccasin Class in Fort Ross, California. In the fort overlooking the Northern California coast, DonnaRae James led 15 students constructing their custom-fit moccasins. DonnaRae provided technical instruction. Then the students chose materials for the inside lining and began to sew. We sipped our coffee and enjoyed the fresh ocean air, telling stories of our ancestors.

Our ages ranged from under 18 to over 60. Haida, Tlingit, Sugpiaq, Dena’ina Athabascan, Inupiaq, and Unangax cultures were represented. We learned interesting differences and similarities in our backgrounds, snacking, of course, on salmon spread and Sailor Boy Pilot bread.

Day two coincided with Fort Ross Festival. As the students finished their liners, the fort filled with Russian visitors and volunteers. Many stopped by our booth to watch us sew and learn Alaska Native history at the fort. This day, we worked on outer moc bottoms and welts of Elk hide. Sinew was used to sew the edges of the moccasins together. As the day went on fingers were poked, stitches were taken out and replaced as the fog lingered over the fort. Over 6 thousand visitors came through the fort that day and learned the role Alaskans held at Fort Ross from 1812-1841.

On our final day, the moccasins took form as rabbit, otter, and beaver furs were used to bring the inner and outer layers together. As students finished their moccasins, we cheered and celebrated. Yet the true reason for our culture camp wasn’t the proudly worn moccasins. It was the community created by previously lonely Alaskans orphaned so far away from our culture. Not only did we learn a skill, we learned language and history, ate our native foods, and created lifelong friendships and plans for future gatherings.